ptp-sim is a community effort to provide a simulation framework for the Precision Time Protocol (PTP) as specified in IEEE 1588-2008. It is based on OMNeT++ and the INET Framework. Discussions about ptp-sim happen at the discussion forum.

The ptp-sim project is the host for the following sub-projects:

The relationship between these projects and various other projects is sketched in the following image: 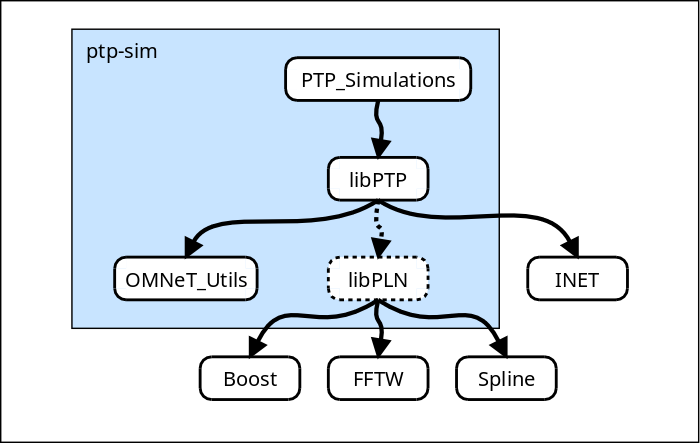 The core projects of ptp-sim are libPTP and libPLN. LibPTP provides different kinds of simulations models for OMNeT++ to simulate time synchronization as specified in IEEE 1588. This includes a PTP stack and simulation models of PTP-capable network cards. Time synchronization is necessary to counter the errors that affect real clocks. Thus, generation of time synchronization makes only sense if these clock errors are also simulated. LibPLN provides realistic clock noise for our simulations, and does so efficiently (which is important for the simulation of larger networks).

The PTP_Simulations project provides examples to show what can be done with libPTP and libPLN. It should serve as a starting point for new users, to help them create their own simulations.

OMNeT_Utils is a collection of generic simulation models which have been developed to support libPTP. These models are not specific to libPTP, and they could be useful for other OMNeT++ projects. They are kept in their own project to make the usage in other projects easily possible.

The ptp-sim projects make heavy use of other projects:

The ptp-sim projects would not be possible without these other open source projects. Thank you!